Airbus A380 flight AF66 from Paris to Los Angeles was forced to make a diversion after one of the four engines failed just west of Greenland. None of the 496 passengers and 24 crew were injured but some were surely a bit frightened when the engine failed. 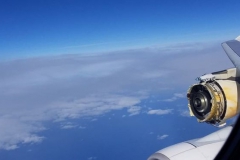 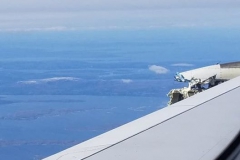 Passenger David Rehmar, a former aircraft mechanic, was on board at the time and told the BBC that from what he observed, the incident was a fan failure. He said he observed a sudden movement followed by a loud noise, which panicked some passengers. “You heard a loud ‘boom’, and it was the vibration alone that made me think the engine had failed.”   Mr Rehmar said that for a minute, he thought “we were going to go down.” He said he doubted it was a bird strike due to the high altitude but likely a stage-one fan, the exterior fan blades on the front of the engine, that had failed.

Fortunately, the pilots were able to switch off the affected engine and the plane stabilized within about 30 seconds.

The plane was able to fly on the remaining 3 engines until it reached Goose Bay Airport in eastern Canada where passengers had to remain on board because the airport was not equipped to handle an Airbus.

Photos of the engine were taken by passengers that show damage to the engine and wing.

The cause for engine failure is not yet known