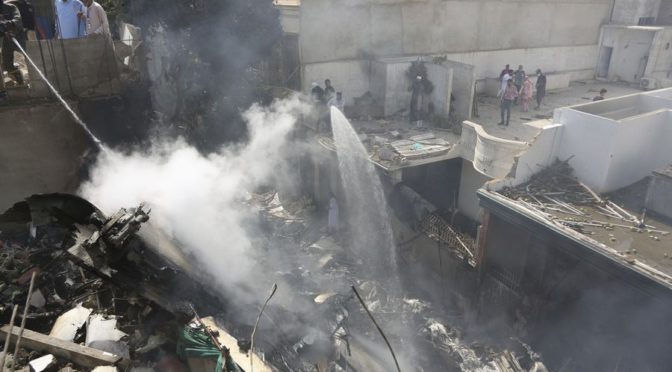 KARACHI, Pakistan (AP) — A jetliner carrying 98 people crashed Friday in a crowded neighborhood near the airport in Pakistan’s port city of Karachi after an apparent engine failure during landing. Officials said there were two survivors from the plane but they also found at least 57 bodies in the wreckage.

It was unknown how many people on the ground were hurt as the Pakistan International Airlines jet, an Airbus A320, plowed into an alley and destroyed at least five houses.

The pilot was heard transmitting a mayday to the tower shortly before the crash of Flight 8303, which was flying from Lahore to Karachi and carrying many traveling for the Muslim holiday of Eid al-Fitr.

Video on social media appeared to show the jet flying low with flames shooting from one of its engines.