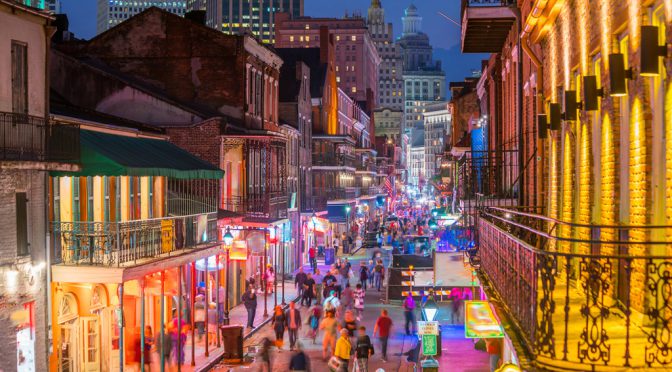 Located along the Mississippi River in Louisiana, this American city is where Jazz music and Mardi Gras festivals were born. It is best to visit this city in February when the city is immersed in festivity, celebrations and music because it is gearing up for an exquisite show of colors, music, celebrations and parades. Next to the Carnival in Brazil, Mardi Gras is your best shot to see the profound effect that music and colors can bring to a city.

Places of Interest in New Orleans
Mardi Gras
Celebrated annually in February, Mardi Gras is the grandest of all festivals in New Orleans. This colorful event simmers the atmosphere of the splendid city from tranquility to festivity and then to craziness. It is celebrated with parades, ball dances and music and is renowned for its outrageous costumes and exuberant figures. The city switches to autopilot mode to accommodate everyone who’d like to be a party to these celebrations, and it usually takes some time before the gold dust settles and solemnity prevails in people’s minds again.

Bourbon Street
The name of this famous street is just so chocolaty that you might take it for a baker’s paradise. However, Bourbon Street is where you’ll get to listen to the best of Jazz music and you can also relish the local cuisines like Cajun. Graceful as this boulevard is, it is usually quiet during the day but wakes up to a colorful life in the evenings. This is the most perfect time of the day to find a Jazz musician melting the audience out of their senses in a street or in a bar.

National WWII Museum (or D-day Museum)
This museum was put up in New Orleans to celebrate the day on which Allied Forces had reached Normandy beach (France) to launch a decisive battle against Nazi Germany. The city was a natural choice for this museum because the boats used in this amphibious military operation were designed, built and tested in New Orleans. At the National WWII Museum, the visitors touch a part of that glorious history by fighter jets, weapons, short films, photographs, diaries and records of the soldiers and generals.