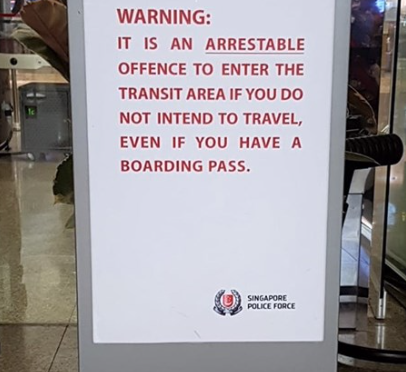 Search for Singapore Flights and Hotels

A man was arrested after he bought a plane ticket to see his wife off at an airport gate – even though he wasn’t flying.

The devoted husband, 27, walked his spouse to the departure gate at Singapore’s Changi International Airport despite having no intention to get on a plane.

The man apparently wanted to spend every moment he could with his wife before she travelled.

His show of affection did not impress airport staff and he was arrested by the Singapore Police Force.

Authorities have told other people to not try the same thing or they risk being detained.

Police warned on Facebook: “Passengers who enter the transit areas with a boarding pass should only be there for the purpose of travelling to their next destination.”

It’s an offence in Singapore to ‘misuse’ a boarding pass and if you go beyond the gate without intending to travel you can be locked up for two years or fined S$20,000 (£11,975).

Search for Singapore Flights and Hotels