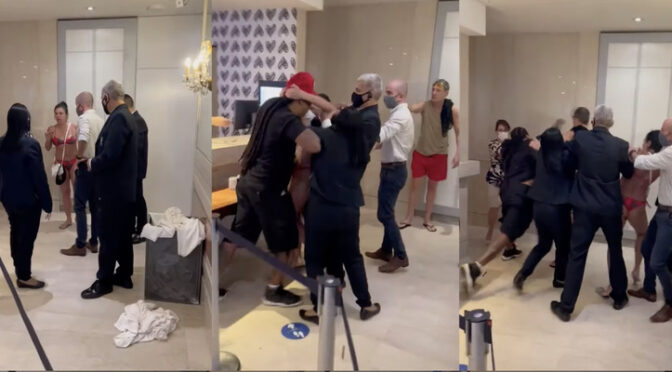 Watch til the End, Drunk Racist Man and woman mad because he’s Gold Or Diamond Hilton member and therefore gets service before everyone else. Hotel staff just sitting by and letting the racist woman do whatever, mind you she already touched him prior #Karen #hilton pic.twitter.com/tApFW53z2a

The Daily Dot has a synopsis of what occurred in the video:

The footage shows HL standing by a reception desk separated from the white couple by four people who appear to be hotel security guards.

“Y’all haven’t de-escalated the situation because she’s still right there talking,” King can be heard saying, referring to the white woman. “Y’all are supposed to separate the party.”

After some unintelligible shouting and arguing, the white woman broke apart from the staff and attacked HL, wrapping her hands around his head and pulling him away from the reception desk. He can be seen trying to break free from her hold, then he punched the white man. The white man fell to the ground and seemed to be knocked out.

The security guards then attempted to restrain the white woman. Meanwhile, King can be heard repeatedly calling out that “everything is on camera.” In the video, HL described the couple as “drunk” and “rude.”

The security guards’ efforts to subdue the white woman didn’t seem to work, and she came back into the video frame, pulling herself out of the guards’ grips. She approached her partner, who was still laying on the floor. Then she yanked off her purse and stomped back over to HL, who was still standing by the reception desk.

The white woman tried to attack HL again, but security guards pulled her away. Another staffer led HL away. HL shook his head without saying anything as he walked away, but King questioned why the white woman was able to continue rampaging.

The white woman broke away from the guards again and tried moving toward HL again.

The guards seemed to be trying to pull the woman down a hallway as the video ended. After the incident, HL stated he wasn’t allowed to stay at the hotel that night.

And what, Matlock, is your assessment of the drunk, rabid white woman who initiated contact with the non threatening black man she assailed?