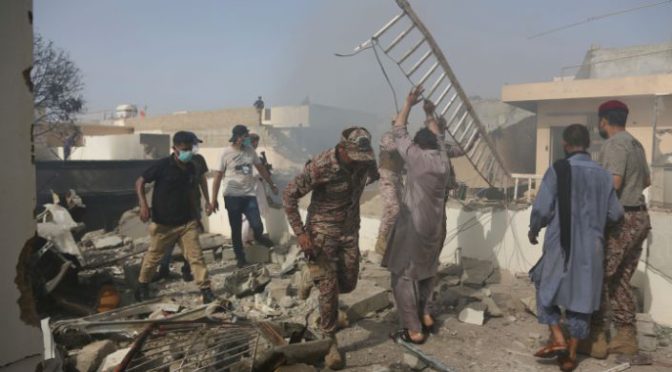 Ninety-seven bodies have been pulled from smoldering rubble in Karachi, Pakistan, where a plane crashed Friday shortly before 3 p.m. local time.

Before it crashed, the plane jolted violently in mid-air. Passenger Muhammad Zubair thought it was turbulence. Then the pilot came on the intercom to warn the plane was experiencing engine trouble and the landing could be “troublesome.”

In a telephone interview from his hospital bed, Zubair, one of only two survivors, told The Associated Press that Pakistan International Airlines flight PK8303 had taken off on time from the eastern city of Lahore at 1 p.m. It was a smooth, uneventful flight until the aircraft began its descent near Karachi.

Zubair said he survived by launched himself from the burning aircraft.

“When the plane caught fire. I unfastened my seatbelt and saw a light. I came out of the plane, I jumped from nearly 10 feet high,” he said in a video interview with TRT World.