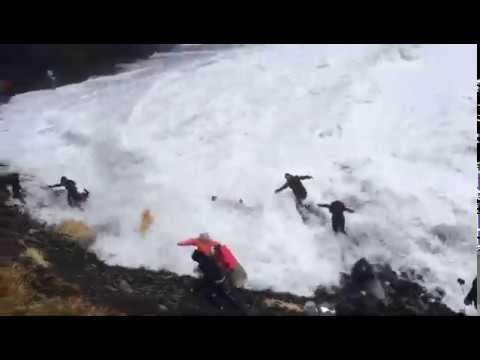 When tour guide Thorolfur Sævar Sæmundsson brings a group to Iceland’s iconic Reynisfjara Beach, he warns them not to go down to the shoreline.

His reason? The beach is well known for having a dangerous undertow and so-called “sneaker waves,” which can catch people by surprise. Several tourists have died there over the past decade or so, Iceland Monitor reported.

On November 11, a dramatic illustration of the dangers of the waves at the beach was observed, from a safe distance, by Sæmundsson, who recorded video of tourists floundering after being caught out.

Emergency services were called to the scene to assess a tourist who was knocked over and injured, the Icelandic news site Visir said.

While the beach is safe “95% of the time,” Sæmundsson told Storyful, “sometimes we have high waves. People need to be careful.” Credit: Thorolfur Saevar Saemundsson via Storyful