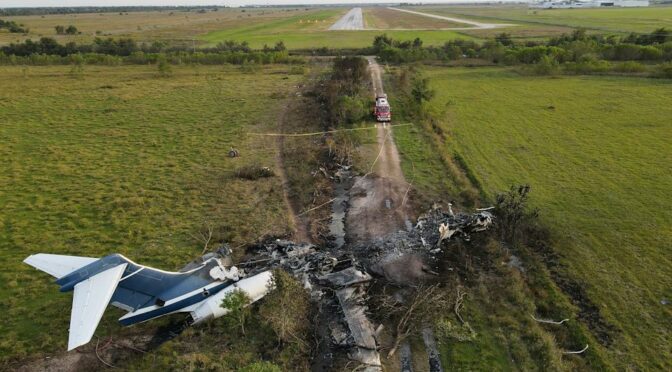 When rescuers arrived to the scene of a plane that had rolled off a Texas runway and caught on fire Tuesday morning, nearly two dozen people had already exited the burning aircraft, authorities said.

There were no deaths or major injuries in the incident, but crews had to rush to extinguish the fire, which had engulfed the plane, a McDonnell Douglas MD-87. Dramatic footage of the fire showed black smoke billowing from the charred remains of the aircraft as crews attempted to extinguish the fire.

“I think we can all agree we can celebrate on today that no one was killed in this horrific incident,” said Sgt. Stephen Woodard, spokesperson for the Texas Department of Public Safety.

The plane, carrying 21 people and traveling from Texas to the AL Championship Series game in Boston, was attempting to take off from Houston Executive Airport and traveled about 500 feet on the runway before it rolled through a fence and caught fire in a field, officials said.