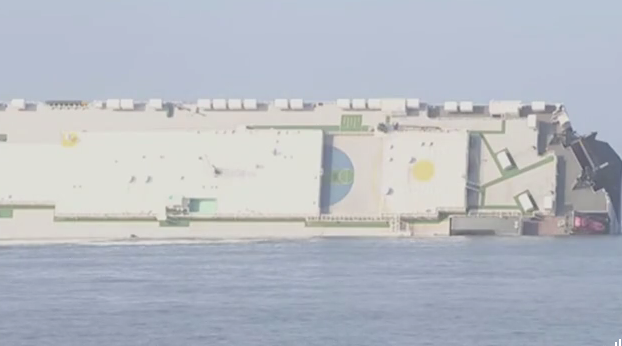 Rescue teams were searching for four crew members after a cargo ship caught fire and capsized Sunday off the Georgia coast, the Coast Guard said.

Twenty people were rescued from the Golden Ray, a 656-foot-long ship bound for Baltimore that was “listing heavily” in St. Simons Sound near Brunswick, officials said.

Coast Guard Sector Charleston was notified by the Glynn County 911 dispatch that the ship had capsized. The Coast Guard “immediately issued an urgent marine information broadcast” and sent ships and two helicopters to the scene.

The ship’s command and chief engineer were assisting authorities and salvage teams in stabilizing the ship so rescue efforts could continue, the Coast Guard said. Local first responders and towing groups also were aiding the effort.

The cause of the incident was under investigation, the Coast Guard said. It was not clear whether weather conditions played a role. Hurricane Dorian brushed past the Georgia coast last week but was centered off Canada on Sunday.

The port of Brunswick was closed to boat traffic, and there was an established emergency safety zone in the St. Simons Sound. Ships were not authorized within a half-mile of the Golden Ray.