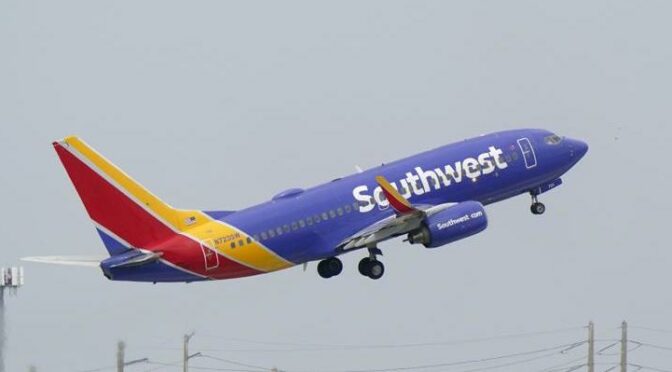 Feb. 23—Part of Southwest Airlines’ slogan is: “Low fares. Nothing to hide.”

One passenger apparently took the second part a little too seriously during a flight over New Mexico on Friday.

The man, who allegedly exposed himself, urinated in a corner and tried to fight two flight attendants, got a first-class ticket to jail when the plane was diverted to the Albuquerque International Sunport.

Samson Hardridge, who is 33 or 34 years old, is charged in federal court with interference with flight crew members and attendants in the Feb. 18 incident.

Hardridge’s attorney did not respond to a request for comment.

According to a criminal complaint filed in U.S. District Court:

Hardridge was a passenger on a Southwest flight from Dallas to Burbank, California, when he got up to use the bathroom, which was occupied. A flight attendant asked him to wait in the aisle and, Hardridge, with his hands in his pants and a question of his own, asked if she wanted to see his genitals, “to which they declined.”

Hardridge then went to the galley door and began to urinate “in the corner of the aircraft” before the flight attendant told him that was not allowed. Hardridge became “very hostile,” yelling and threatening two flight attendants, calling them “dumb (expletive).”

The flight attendants asked Hardridge to clean up his urine and, as he continued to yell, told him to go back to his seat. The flight attendants “feared for their safety and that of the flight” due to Hardridge’s unpredictable behavior and alerted the pilot, who landed the plane in Albuquerque.