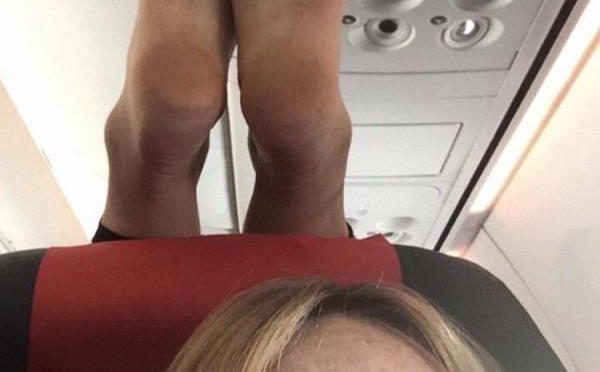 A female plane passenger took to Reddit this week to share a horrifying photo of a stranger performing a rude act during her flight.

The woman, who goes by WoodySoprano on the social media platform, posted an image of a traveler resting their bare feet on her headrest. Though the Reddit user’s face is cropped, her terrified eyes tell all.

“Going to be a long flight,” she captioned the photo.

The woman’s post immediately went viral, generating nearly a thousand comments by Tuesday afternoon. Some argued that the female passenger should have confronted the offender.

“I don’t get it at all. I would get up the moment I felt someone put their feet there and said something,” one person wrote. “You should never suffer in silence, never. Even as a passenger, if I had seen this, I would laugh and look at the person in the unfortunate seat and say ‘I’m glad the person behind me has manners and isn’t a complete idiot.’ because I do realize some people are afraid of confrontations.”

Others suggested that the woman should have alerted a crew member.

“Talk to a flight attendant,” one person posted. “If the plane is still at the gate then kick him/her off..disorderly conduct in a tube that is 30,000+ ft above ground is stupid… if it got worse.. the other passengers can tape him/her to the seat for the rest of the flight.”