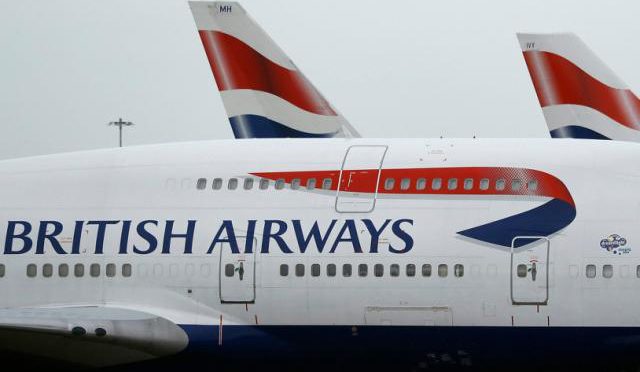 British Airways has accused its pilots of “destroying the travel plans of tens of thousands” after a union announced they are to stage a series of strikes and demand twice the pay of the average pilot.

The British Airline Pilots’ Association (Balpa) said its members will walk out on September 9, 10 and 27.

The union said it put forward a number of packages during several days of talks at the conciliation service Acas that it believed would have resolved the dispute without a strike.

A statement said: “BA did not accept any of these packages, and it is clear following discussions with members over the last few days that BA’s most recent offer will not gain the support of anywhere near a majority of its pilots.”

BA, whose captains earn an average of £167,000, has offered an above-inflation deal worth 11.5 per cent over three years but pilots are demanding a bigger cut of the company’s profits.

The pay rise offered would give pilots a £20,000 rise over three years.

BA said: “It is completely unacceptable that Balpa is destroying the travel plans of tens of thousands of our customers with this unjustifiable strike action.”

In British Airways’ centenary year, this will be the first time its pilots will go on strike.

Balpa said the strikes were a “last resort and with enormous frustration at the way the business is now being run”.

A ballot in favour of industrial action is valid until January, and Balpa warned more strike dates may be announced if the row is not resolved.

Search for your rental car here and save 30% off.

Balpa said: “With a 93 per cent vote in favour of taking industrial action, and with no prospect of any further meaningful talks, we have no choice but to call this action.

“A day of strike action will cost BA around £40 million. Three days will cost in the region of £120 million.

“The gap between BA’s position and Balpa’s is about £5 million.

“Our proposal remains on the table should BA wish to reach agreement prior to strike action.

“British Airways is an extremely profitable and successful company, and pilots have been proud to play their part in that.

“Over recent years BA pilots have made sacrifice after sacrifice to assist the company, such as taking a pay cut, productivity increases, closing the final salary pension scheme, giving up annual leave days, a new rostering system and reducing flying pay.”

BA said in a statement: “We are extremely sorry that after many months of negotiations, based on a very fair offer, Balpa has decided on this reckless course of action.

“We are now making changes to our schedule. We will do everything we can to get as many people away on their journeys as possible.

“However, it is likely that many of our customers will not be able to travel and we will be offering refunds and re-bookings for passengers booked on cancelled flights.”

Flights on BA CityFlyer, SUN-AIR and Comair are not affected by the strikes.

BA said it was exploring options to supplement its fleet by using aircraft and crew from other airlines and working with its partner airlines to schedule larger aircraft.

It added: “Our proposed deal of 11.5 per cent over three years is very fair and well above the UK’s current rate of inflation, and by contrast to Balpa has been accepted by the members of the Unite and GMB trade unions, which represent nearly 90 per cent of all British Airways colleagues including engineers, cabin crew and ground staff.

“We continue to pursue every avenue to find a solution to avoid industrial action and protect our customers’ travel plans.”

BA chief executive Alex Cruz said the pilots had been offered an “incredible, inflation-busting deal” which would take a captain’s pay to over £200,000 a year.

He said they had been “very badly served” by their union.

“Passengers will be contacted in the next 24 to 30 hours,” said Mr Cruz, adding he hoped talks could resume with Balpa as soon as possible.